The subsequent fate of the Airline Fleet:

Beech 18 N15750 had been undergoing maintenance at Lasham between January and August 1971 but Dan Air had suspended work owing to a lack of parts and, possibly, cash. It remained on the US register with Stephen Quinto recorded as owner until the summer of 2009. It was, however, virtually derelict at Lasham as from 1972 and was, reportedly, offered to the Aeroplane Collection. However, it remained at the Hampshire airfield until purchased for use in a BBC documentary programme based on the crash of Beech 18 CF-RLD in the North West Territories of Canada. Dismantled rather brutally on 1st February 1977, it was loaded onto a truck two days later and driven north to Corgarth, near the Lecht, in Scotland. The filming left the hulk of the Beech in poor condition but, several years later, the National Museum of Flight rescued the tailplane and fins to complement the ex-Loganair Beech 18 G-ASUG at their East Fortune museum. 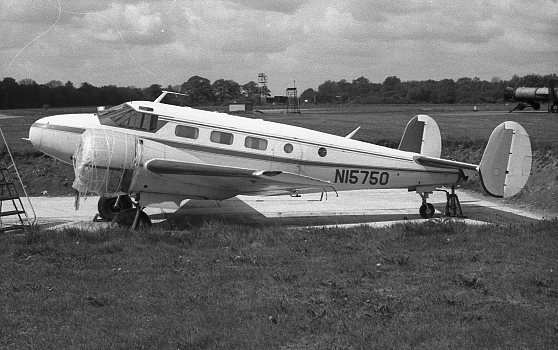 Beech 18 G-AYAH was flown to Shackleton Aviation’s Coventry base in March 1972 and sold-on to Eastern Seaboard, a Dundee-based air taxi outfit which specialised in light freight and shellfish transport. Some ad hoc missions were carried-out for the oil industry but the lobster and seafood flights from coastal Scotland to France proved to be the main breadwinner. Dundee and the old-established Broomfield airfield at Montrose were frequent bases in 1972 and early 1973 but, by May ’73, business had tailed-off and G-AYAH was returned to Shackleton’s. It was re-registered N96240, reportedly to Urban Drew of Khartoum, Sudan in August 1976. Drew’s operations were, at that time, via a company called Air Chantenis. In 1978 the Beech was reported to be supporting Euroworld operations in Spain and Morocco from the Warplane Flying Group’s Wellesbourne Mountford base. In the early 1980s she was based at Blackbushe but departed in 1982 and was operated occasionally by Jeff Hawke and Visionair at air displays. By 1985, it was in open storage at Rochester, Kent. Variously noted as belonging to Euroworld as from 1992, little happened until June 1998 when ownership is recorded as passing to the aircraft restorers Edwards Brothers Aviation. The Beech was ferried to North Weald on 26th June 1998, its first flight for 13 years, but remained folorn for some time at the Essex airfield with a partially-collapsed undercarriage. By the summer of 2005 (some sources say 2006), the Beech had been registered to Edwards Worldwide Aviation and, subsequently, passed to Southern Aircraft Consultancy in April 2010. There was a spell when she was based at St Yan in France with Frederic Haegelen but she mainly remained with Southern at Penzance and at various Norfolk airfields. 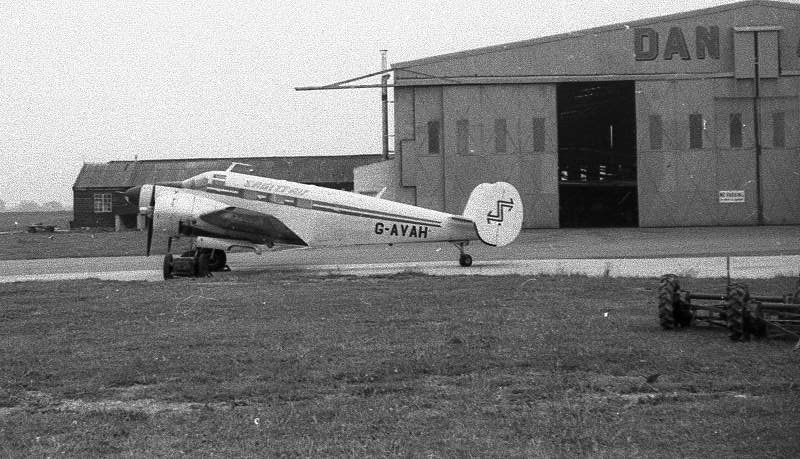 Beech 18 G-AXWL moved with the airline to East Midlands and was sold in the USA with the new registration N6685 and, subsequently, N71171X. Her luck ran out on 19th November 1976 when she reportedly ran out of fuel and crashed at Shelbyville, Indiana. The crew escaped with minor injuries but the Beech was beyond repair.

Argosy AW650 G-APRN‘s charter was terminated on September 25th 1972 and the aircraft was repossessed by the owners, Hawker Siddeley Aviation, and flown to Bitteswell airfield. It was registered to Field Aircraft Services on 13th February 1973 and chartered to Air Bridge Carriers on 22nd June 1973. She had a productive career with ABC including a spell as the support aircraft for the Sepecat Jaguar demonstrator XX846 during its 1975 sales tour of the Middle East. Following a major overhaul and replacement of the wing spar in 1979, G-APRN emerged in a new ABC colour scheme and slotted into a regular Liverpool to Belfast routine. A landing accident at Aldergrove in 1982 led to withdrawal from use and cannibalisation for spares.

Argosy AW650 G-AZHN followed the same pattern as ‘PRN and was registered to Field’s on 2nd March 1973. Also operated by Air Bridge Carriers, G-AZHN retained most of the Sagittair purple cheat line colour scheme for several years. She was leased to Air Anglia briefly at the end of 1975 before the East Anglian operator chartered Field’s G-APRL in the full AA scheme. G-AZHN was cut-up at East Midlands/ Castle Donington in 1977.

Argosy AW650 G-APWW was the last aircraft to fly for Sagittair and the CAA record it as being sold on 16th November 1972 to Carbia Transport of Heathrow. This was the name that Field’s had used when applying for licenses and the registration was almost immediately altered to Air Bridge Carriers Ltd. At the time, there was a suggestion that the name was made-up of airline personnel initials: Capt Arnold-Boakes had been a Sagittair pilot and Jack Capstick was a director of both Field’s and the new freight carrier. However, the ‘Air Bridge Carriers’ titling soon dispelled this theory. On April 9th 1974, ‘PWW is recorded as having been sold to Australia with the new owner listed as Brain and Brown Air Cargo on May 1st. She was registered VH-BBA on May 30th 1974 but seemed to have little use before being withdrawn from use at Melbourne’s Essendon Airport during 1974/ 75. After a major renovation, the Argosy operated for the courier outfit IPEC (Interstate Parcel Express Company) as from January 12th 1978. Other operators followed in swift succession (some as lessees/ associated companies): World Vision of Australia in 1980, Kris Air of Singapore in the same year, Air Tenggarra of Singapore in 1981. During her spell with Kris Air, the US registration N37807 seems to have been adopted and Air Tenggarra seem to have had links back to Air Bridge Carriers from whom they leased a Vanguard. By August 1982, she was back with IPEC in Melbourne and registered VH-IPD on June 24th the following year. The Argosy continued with IPEC until December 1st 1989 when she completed her last flight with total flying hours of 32,028. She was scrapped at Essendon in December 1990. Information from www.aussieairliners.org

Click here for link to Geoff Goodall's photo of VH-IPD at Essendon immediately prior to scrapping. From www.airhistory.net.

Argosy AW650 N895U was painted in the purple cheat-line of Sagittair during her preliminary service by Field’s at Castle Donington in Spring 1972. After a spell in storage, the fall-out from Sagittair was tidied-up and the Argosy emerged as G-BEOZ. Registered to Field’s on 28th March 1977, the Argosy operated for some years in ABC’s red and white colour scheme having been officially chartered to them as from 30th August 1979. In 1980, the the arrival of the first ex-BEA Vickers Vanguards, Air Bridge Carriers shortened their name to Air Bridge, the first of many name changes. The courier market was expanding rapidly and, in 1983, Air Bridge negotiated a link-up with Elan Couriers. Elan had been established by DHL but there had been a management buy-out by the Birmingham-based operator. G-BEOZ was painted in the maroon and white Elan Air colours and named ‘Fat Albert’, a name reminiscent of British Air Ferries’ Carvairs. During 1984, the Argosy was busy on flights around the UK and Europe but, in 1986, she was retired and, by October of that year, she was parked, engineless, at East Midlands Airport. The following year, G-BEOZ was donated to the East Midlands Aeropark and she remains preserved there.

The Sagittair legacy. Air Bridge changed their name to Hunting Cargo Airlines in September 1992 and began to take delivery of a fleet of Irish-registered Lockheed Electras as from Spring 1993. Trouble was brewing for Elan and, in February 1994, the courier company collapsed. Hunting, however, was keen to continue with parcels delivery but, in June 1998, they sold their operation to the aviation conglomerate being built-up by Compagnie Maritime Belge and South Africa’s Safair. The new company moved its headquarters to Dublin and the operation was renamed Air Contractors. Since then, further companies have been added with the acquisition of Europe Airpost in March 2008 leading to another rebranding as the ASL Aviation Group. In the 2020s, ASL Ireland operate over forty aircraft with clients ranging from Amazon and Aer Lingus to Fedex, DHL and UPS – they have truly cornered the hub and spoke courier business envisaged by Stephen Quinto. ASL in France operate La Poste services, the air arm of TNT was acquired in Belgium, Farnair was incorporated in Switzerland and there is an operation in the Far East. ASL have become a global player which can trace its roots back to the Air Bridge Carriers set-up to capitalise on Sagittair’s activities.