The scrapyards of Salamanca seem to be competing for aviation relics. Cherokee EC-CBZ sits atop a pole at Desguaces Villalba to the north of the city but, a kilometre up the road, Desguaces Montero wins the contest with ex-Spanish Air Force C-47/ T3 744-28. She has been there for many years and has recently been taken off her mounting poles. The wings have been removed and are alongside the main aircraft. These photos was taken on March 13th 2022.

The propellers are hand-crafted and the aircraft paintwork is either being redone….or needs to be. Wings, rudder and ailerons seem to be getting some attention.

42-24052 returned to the USA and was at San Bernardino by 6th July. After arriving at the Walnut Ridge disposal site on 16th November 1945, she joined the civil register as NC65282 with the Executive Transport Corporation of Grand Prairie, Texas, a company which overhauled many ex-military aircraft prior to airline service. Moving on to Northeast Airlines of New England on 17th May 1946, she was bought by Piedmont Aviation Inc. on 21st February 1948. Operating from Winston, North Carolina,  the C-47 was re-registered N44V and named ‘Piedmont Commonwealth’ (1). Charlotte Aircraft Corporation purchased many of the C-47s supplied to the Spanish Air Force and several of these, including N44V, were ex-Piedmont aircraft. Charlotte received the C-47 in 1961  and prepared her ready for delivery to Spain by the CASCO Aircraft Ferrying service. 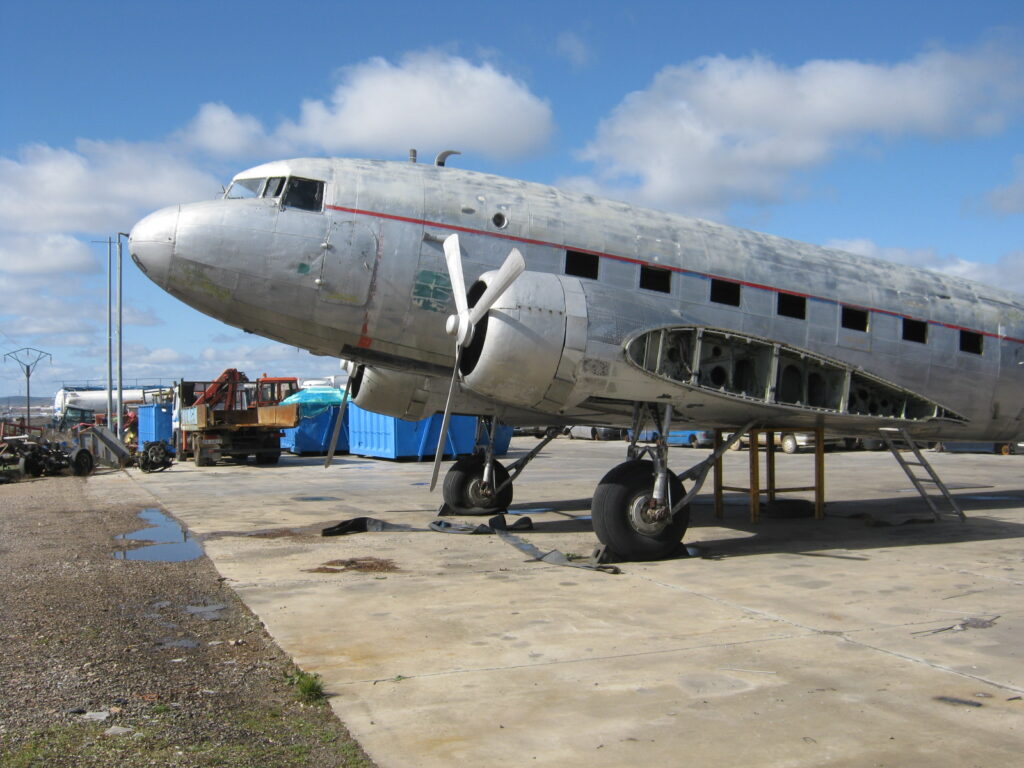 As a neutral country during WW2, Spain didn’t benefit from the allies post-war Marshall Plan years of largesse and didn’t receive allocations of RAF or USAAF transport aircraft in the same way as France, Greece or Belgium. The USAAF did contribute a pair of interned C-47s which were impounded after landing in Spanish territory during Operation Torch (2) but these were returned later without joining the Spanish Air Force. A couple of ex-RAF aircraft made their way to Spain in 1947 (3) but the Spanish Air Force’s eventual tally of 67 C-47s was accumulated in three main batches (3). Following the signing of the Hispano Co-operation and Friendship Treaty in 1953, US-aid contributed a dozen C-119s. These were swapped for a 22-strong fleet of C-47s delivered to Getafe Air Base during 1956-57, plus a further two in 1963. These were followed by thirty aircraft purchased on the open market between late 1961 and 1963. ’28’ was one of these C-47s and was ferried from the USA to Spain in December 1961 by the CASCO Aircraft Ferrying Service. Eleven C-47s were received from Iberia between 1965 and 1966.

The C-47 was titled the T3 in Spanish service and the ‘T’ reflected the basic transport and freight duties of the sixties and also the training roles performed by Escuadrones 744 and 745 at Jerez and, subsequently, Matacan. These two squadrons were part of the multi-engine training unit titled the Escuela Militar de Transporte y Transito Aereos and, when the type was retired in 1978, each squadron contained eight aircraft. 744-28 was withdrawn at Matacan, Salamanca and has remained there ever since despite its brief appearance on the British register as G-BHUA during the early eighties. 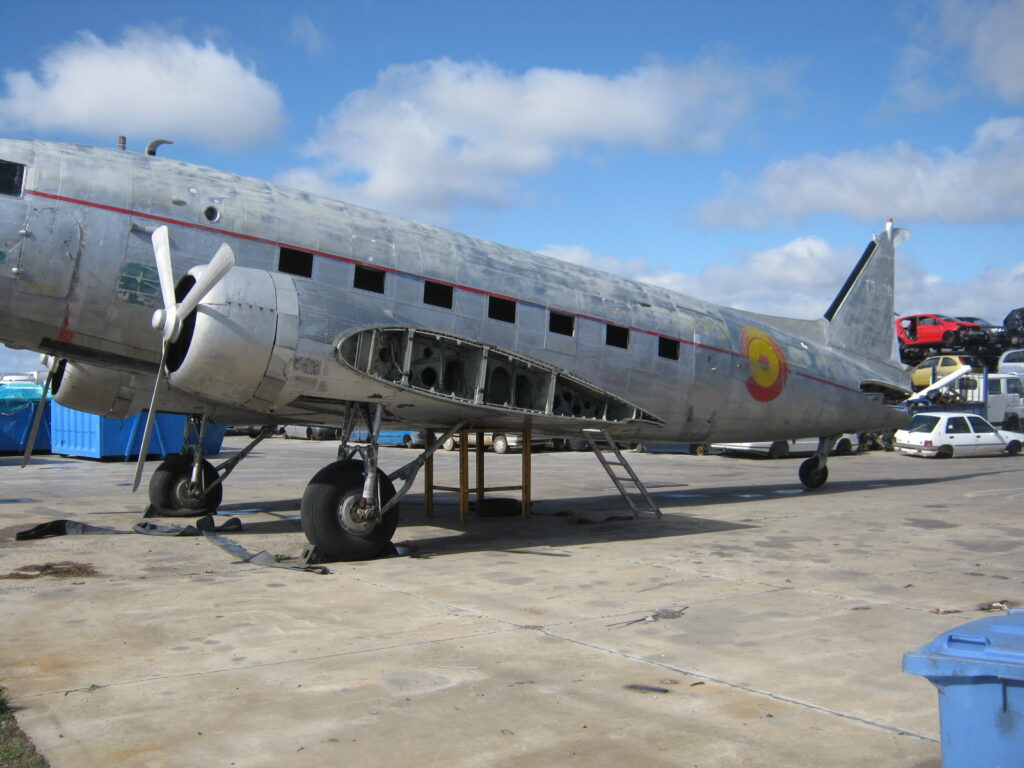 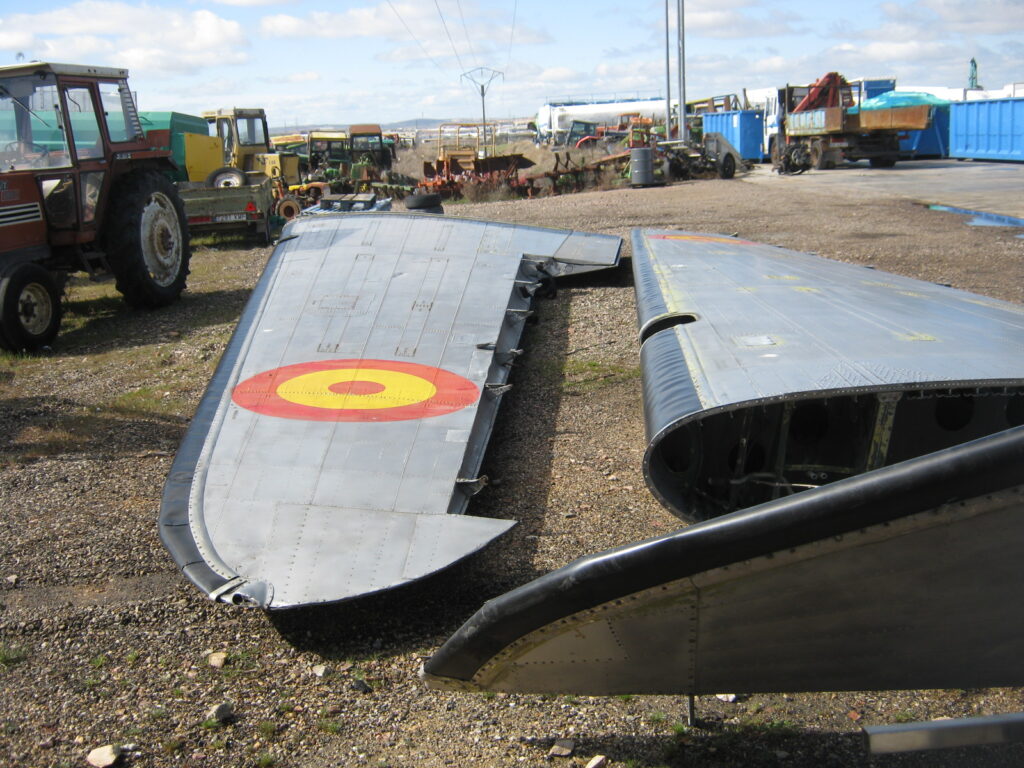 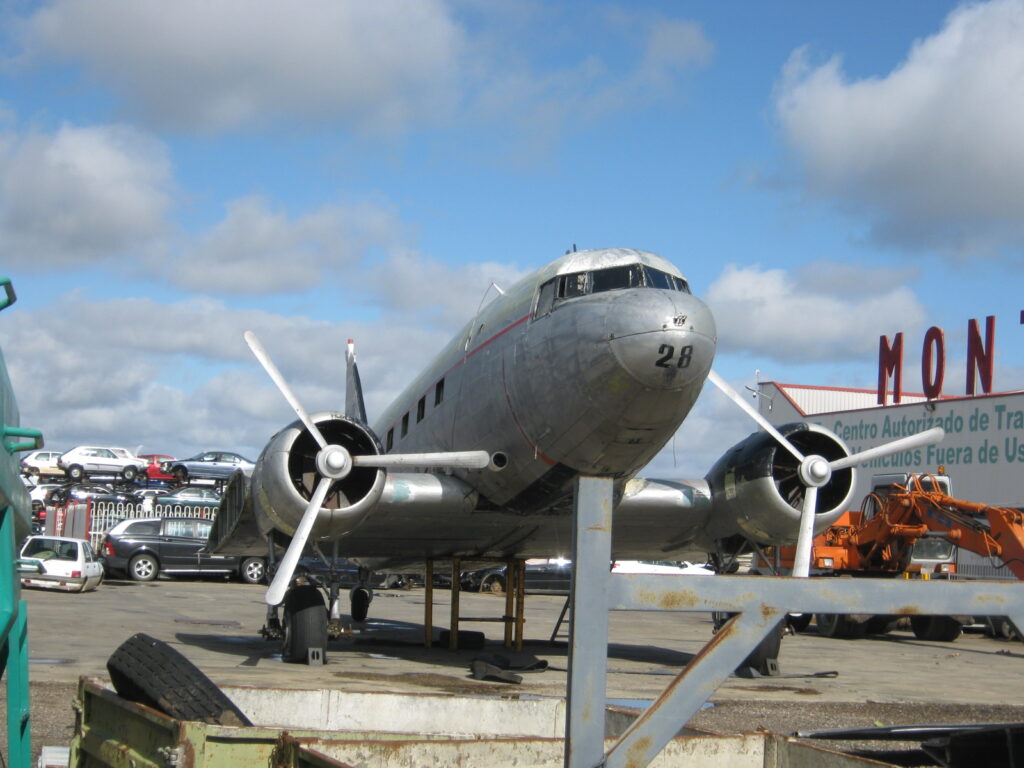 In addition to training duties, the first tranche of Spanish Air Force Dakotas provided essential logistics supply to the enclave of Sidi Ifni in Spanish North Africa during incursions by Moroccan irregulars during 1957. By 1958, Sidi Ifni had been ceded to Morocco.

Over half of the total fleet of 67 survived until retirement between 1976 and 1978. Many gathered at the Cuatro Vientos air base where a large number were scrapped. The balance were sold to US and European buyers and prompted the influx of C-47s to the UK register as from G-BFHA on 23rd November 1977. The aviation entrepreneur Doug Arnold was a keen dealer in historic aircraft and struck a number of fleet-purchase deals via his company Warbirds of Great Britain. His contacts with the Spanish authorities had already produced CASA 2 111 (Heinkels) which had been traded to the USA. He now purchased large segments of the C-47 fleet as well as the CASA 352 license-built JU52s. These aircraft gradually began to arrive at Blackbushe, then owned by Arnold, with the C-47s G-BFHA to BFHC and 352s G-BFHD to BFHG joining the register on 23/11/1977. A subsequent block of four C-47s, G-BFPT to BFPW, was registered in Spring 1978 and deliveries started from Cuatro Vientos via Hurn on 18th April. Eighteen C-47s were eventually added to the UK register with around ten making it to Blackbushe in 1978- an auspicious year for the airfield as Bob Dylan also performed there in July!

Four of the Blackbushe residents were subsequently sold to the Yemen, three or four joined the US-register, one went to a Museum in Berlin and one to the IWM Museum at Duxford. The latter was a veteran of both D-Day and Market Garden operations and, as G-BHUB, was seconded to movie operations for the Yorkshire Television series ‘Airline’ masquerading as ‘G-AGIV’.

G-BFPU was written-off early in the transactions but it seems that only #28/ G-BHUA went directly to the scrap yard in Spain. Hopefully, she will continue in her display role at Desguaces Montero.

(1) Air Britain’s The DC-3 and its Predecessors by JMG Gradidge.

(2) Jose Luis Gonzalez Serrano’s article in Air Britain Digest May June 1977 comments that the two interned aircraft had mistakenly landed in Spanish North African territory (Melilla?) rather than on mainland Europe. It is also suggested that one of these remained in US camouflage and became T3.1 but this seems unlikely and it was probably RAF paint which adorned this, the only camouflaged Spanish C-47.